A depiction of Falcatakely, a bird that lived 68 million years ago. Art by Mark Witton

In Madagascar, a well-preserved, almost complete skull of a crow-sized bird was discovered. Buried in a muddy river of debris about 68 million years ago, the bird had a blade-like beak that offers new insights into the evolution of the face and beak shape in the precursors of modern birds.

The new bird is called Falcatakely, a combination of Latin and Malagasy words inspired by the small size and scythe-like shape of the beak. The latter represents an entirely new face shape in Mesozoic birds that lasted from 245 million to 245 million years ago.

A new variant of skulls and beaks

Birds have decisively influenced our understanding of biological evolution. As early as the mid-19th century, Charles Darwin’s precise observations on the variety of beak shapes in Galapagos finches influenced his treatise on evolution through natural selection. This discovery of fossil birds adds a new twist to the development of skulls and beaks in birds and their close relatives, and shows that evolution can work through different pathways to produce similar head shapes in very distant related animals.

Bird skeletons are rare in the fossil record due to their light bones and small size. Bird skulls are an even rarer find. Falcatakely is the second Cretaceous bird species discovered in Madagascar by the National Science Foundation-funded team.

The delicate specimen remains partially embedded in rock due to the complex arrangement of lightly built bones that make up the skull. Although quite small, with an estimated skull length of only 8.5 cm (approximately 3 inches), the exquisite preservation reveals many important details. For example, a complex series of grooves on the bones that make up the side of the face indicates that the animal had an expansive keratin covering or beak in life.

“When the face popped out of the rock, we knew it was very special, if not unique,” ​​notes O’Connor, professor of anatomy and neuroscience at Ohio University and lead author of the study. “Mesozoic birds with such tall, long faces are completely unknown. Falcatakely offers a great opportunity to rethink ideas about the development of the head and beak in the line that leads to modern birds.” 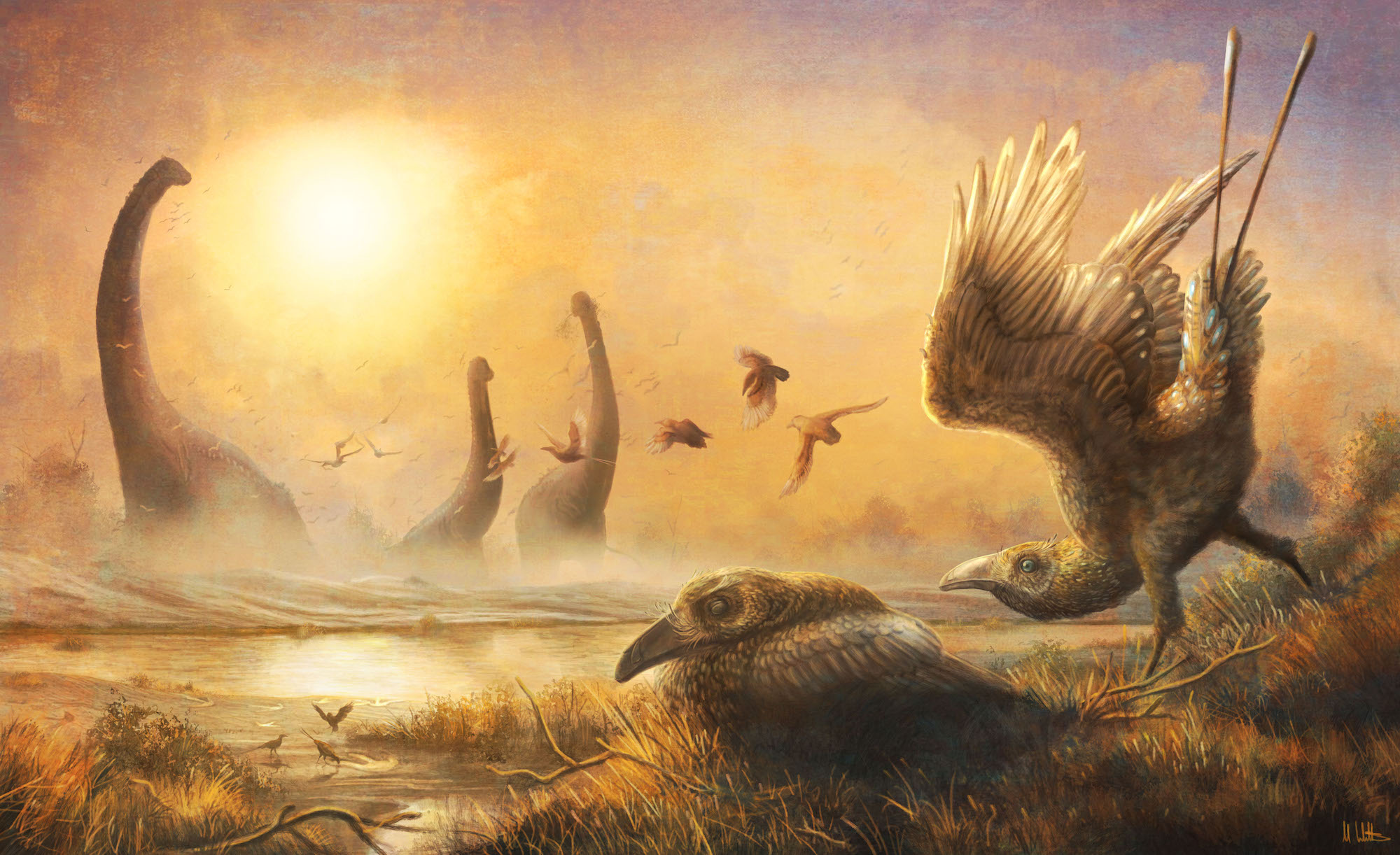 The early bird Falcatakely is depicted among non-Avian dinosaurs and other creatures during the late Cretaceous period in Madagascar. Art by Mark Witton

Falcatakely belongs to an extinct group of birds called Enantiornithes, a group known exclusively from the Cretaceous Period and primarily from fossils discovered in Asia. “Enantiornithins represent the first major diversification of early birds and occupy ecosystems alongside their non-avian relatives such as the velociraptor and tyrannosaurus,” said Turner, associate professor of anatomical sciences at Stony Brook University and co-author of the study. “In contrast to the first birds like Archeopteryx with long tails and primitive features in the skull, enantiornithins like Falcatakely would have looked relatively modern.”

A life reconstruction of Falcatakely could give the impression that this is a relatively inconspicuous bird. But under the keratin beak lies the evolutionary intrigue. O’Connor and his colleagues could not remove Falcatakely’s individual bones from the rock for study because they were far too fragile. Instead, the research team used high-resolution microcomputed tomography (μCT) and extensive digital modeling to virtually dissect individual bones from the rock. The enlarged 3D printing of the digital models is essential for the reconstruction of the skull and for comparisons with other species. In the course of research, it was found that the bones that made up the face in Falcatakely were organized very differently from those of dinosaurs, birds, or non-birds, although the face of a number of modern groups of birds still alive today is superficial is similar.

A distant relative of toucans and hornbills

All living birds build the skeleton of their beaks in a very specific way. It is mainly made up of a single enlarged bone called a premaxilla. In contrast, most dinosaur-era birds, such as the iconic Archeopteryx, have relatively unspecialized snouts made up of a small premaxilla and a large upper jaw. Surprisingly, the researchers found this similar primitive arrangement of bones in Falcatakely, but with a face shape reminiscent of certain modern birds, with a tall, long upper beak, and completely different from anything known in the Mesozoic Era.

“Falcatakely generally resembles any number of modern skin-and-beak birds. However, it is the underlying skeletal structure of the face that turns what we know about the evolutionary anatomy of birds on its head,” noted O’Connor. “There are clearly different developmental methods for organizing the facial skeleton that lead to generally similar end goals, or in this case a similar head and beak shape.”

To find out how this type of convergent anatomy evolved, O’Connor and Turner enlisted the help of their colleague Dr. Called Ryan Felice, an expert on skull anatomy in birds and other dinosaurs. “We found that some modern birds such as toucans and hornbills developed very similar crescent beaks tens of millions of years after Falcatakely. What is so amazing is that, despite their distant relationship, these lines converged on the same basic anatomy, ”noted Felice, a lecturer in human anatomy at University College London.

Falcatakely was recovered from the newest rocks from the Cretaceous Period (70-68 million years ago) in what is now northwestern Madagascar, in an environment interpreted as a semi-arid, highly seasonal environment. A number of other truly bizarre animals also lived in the same environment, such as the pug-nosed herbivorous crocodile-shaped Simosuchus and the recently described Adalatherium mammal. “To push the boundaries of what we know about Earth’s history and biological evolution, we need to look into unexplored or unexplored regions,” noted Turner.

“The Falcatekely discovery underscores that much of Earth’s deep history is still mysterious,” added O’Connor, “especially from those parts of the planet that have been relatively little explored.” Madagascar has always exceeded the limits of biological potential. Indeed, Madagascar’s unique biota has fascinated natural historians and scientists in many disciplines, often in the context of isolated evolution on the large island continent. “The more we learn about animals, plants and ecosystems from the Cretaceous Period in Madagascar today, the more we see that its unique biotic signature extends far back into the past and not only reflects the island’s ecosystem in recent times.”

Thank you Ohio University for providing this news.

The EU and the UK have agreed to keep working together. What’s in it for nature?

A rare bird find does not lead to another

How to prepare for the fishing season

What you need to know about holistic medicine for dogs

Help identify a chick with a donation to the California Condor...

Great extension of the national park for the other great forest...